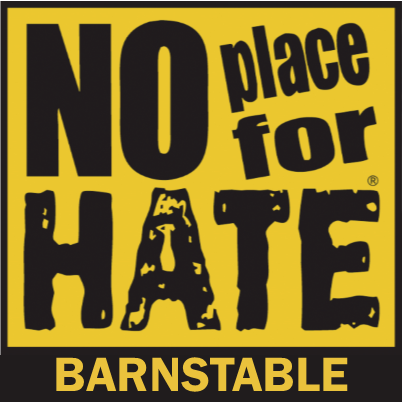 Hyannis, MA, September 25, 2019— A “Kick-Off Meeting” for the newly formed Barnstable No Place for Hate (BNPFH) group is scheduled to take place on Sunday, October 20, 2019 from 2:00-4:00pm in the cafeteria of Cape Cod Community College.  Members of the community are invited to attend this important meeting that will detail efforts being established to provide support and resources for Barnstable residents impacted by bias or hatred of race, disabilities, gender identity, religious beliefs, and intolerance or bigotry of any kind.

The No Place for Hate movement spearheaded by the Anti-Defamation League (ADL) in 1999 originally emphasized for public schools to act and make positive changes that combat bias, bullying, hatred and unacceptance of any kind within their individual educational institutions. The movement reached over 1600 schools across the country according to the ADL website. Over time, the No Place for Hate movement spread to larger community-wide efforts, and on Cape Cod, the town of Falmouth currently has an established and active No Place For Hate group. Other towns in the South Shore community including, Stoughton, Brockton, Randolph, Quincy and Plymouth are among No Place for Hate Communities in Massachusetts. 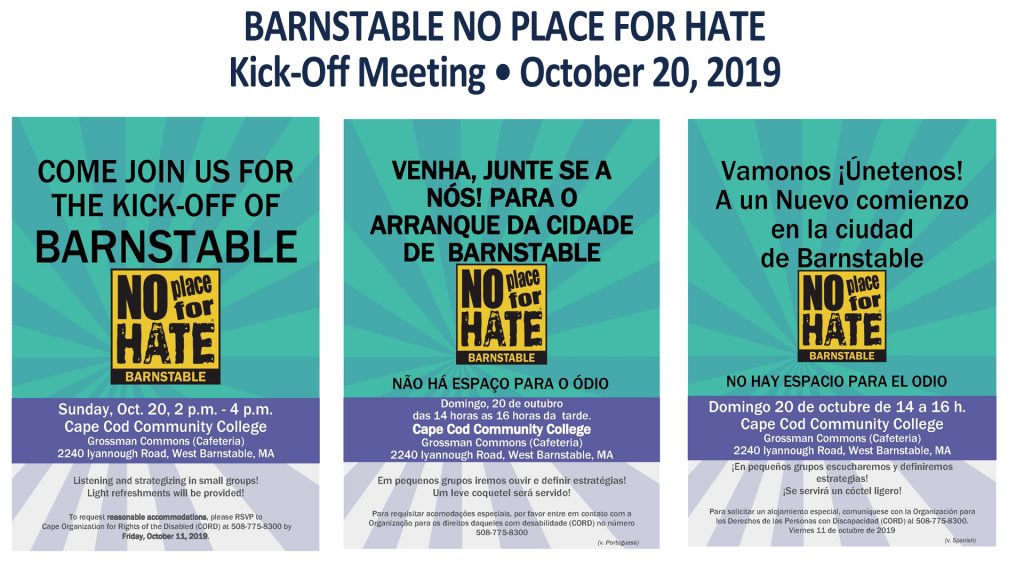 Cape Cod is not immune to incidents of bigotry, discrimination and expressed hate. Nancy and Paul Thompson, both Cape Cod residents and members of the NAACP Cape Cod Chapter detailed in an APnews article in April 2018 of the hatred and racism they’ve experienced on Cape Cod, specifying an incident at a local restaurant in Hyannis.  The article also mentioned an act of hatred against the African Meeting House in Nantucket. In February 2019, police were called to investigate the defaming of a building with hate symbols at the Christian Camp Meeting Association at Craigville Beach in Centerville. The investigation led to the arrest of three sixteen year old boys. Both Cape Cod Synagogue, a Reform Jewish Congregation in Hyannis and Chabad, an orthodox Jewish community in Hyannis have experienced direct attacks of hatred over recent years.   The Barnstable Police Department has a total of 20 recorded instances of hatred between 2017-2019, among them discriminatory acts of bias against race and religion.

The Kick-Off meeting scheduled for October 20th at Cape Cod Community College is the first of what the new group sees as fresh and innovative opportunities to connect,  provide education to the community, and establish important resources and places to go when anyone or any group of people experience hatred of any kind.  For questions regarding the BNPFH group or meeting on October 20th, please contact Rabbi David Freelund ([email protected]) or Eileen Elias ([email protected]).

The Town of Barnstable No Place For Hate (BNPFH) values diversity and supports the civil rights of all people.  We are a positive, loving response to hatred, intolerance, and all other forms of bigotry and discrimination.  We strive to work with like-minded individuals and groups in serving the people of the Town of Barnstable by providing or supporting community services that will keep Barnstable a safe and welcoming place.

We are a voice to create public awareness including: