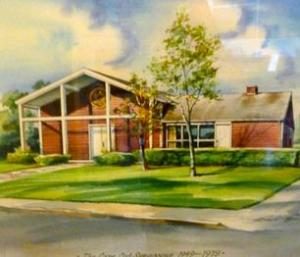 Cape Cod Synagogue began its life on Cape Cod when fifteen young Jewish women met to discuss a need for Jewish education for their children and community life for their families. The Jewish Women’s Club was organized in July of 1933 and the Jewish Men’s Club in November, the same month that the new congregation’s first rabbi came to the Cape. The community affiliated with the Conservative movement and remained there until 1950 when it voted to change its status to Reform and become part of the Union of American Hebrew Congregations.

Hebrew and Sunday School classes were in place in 1934, offering instruction from Kindergarten to Bar/Bat Mitzvah; in 1958 Confirmation classes dealing in moral and ethical issues were added for tenth grade high school students. School and worship services were held in a series of rented meeting rooms until 1948, when ground was broken on Winter Street, Hyannis, where the first and then only synagogue on Cape Cod was built. By 1950 the congregation numbered 53 families; in 1978 there were 237, and in now 300 member families.

The original building was expanded to meet the needs of the congregation in 1979 and again in 1982 with the addition of the Learning Center. Starting in 2007, a five year renovation of our facility was undertaken, with the goals of beautification and a general “greening” of our facility to best preserve the environment.

The present complex houses a myriad of social and educational activities and services, reaching an age group from pre-schoolers to retirees. In the Jewish tradition, the community continues to study, interact, and grow. It is a wonderful mix of people, history, ritual, and desire, a warm, caring community, a rich and unfinished mosaic of lasting beauty.